Why Tor is not already a decentralized network?

I'm wondering since a long time why the developers of Tor do not have already make Tor a truly P2P network where the entire Tor network would be 100% decentralized, only running be voluntary and where nobody could take the network down or interfere with it, even versus a big adversary (eg : the United States)

One example of one attack that I remember because of the fact that tor is not a fully-decentralized net : https://blog.torproject.org/blog/possible-upcoming-attempts-disable-tor-network

Is this at least considered in one future version ?

The answer would be simple: Decentralization is a difficult problem.

I suggest you read The fifteen year struggle of decentralizing privacy-enhancing technology. In this paper the authors list 4 major problems that needs to be addressed for decentralization:

Most people take up bandwidth more than they donate and proposals to introduce incentives into Tor have failed. . If one would also have to build an incentive system into a decentralized system, there should be a way to manage the ratings of each client without allowing falsification.

A truly decentralized system requires the participating nodes to have direct connection to each other. But because IPv4 addresses are getting scarce, ISP often tend to put more subscribers in a single network address suing carrier-grade NAT.

If in a decentralized system one client wants to become a bridge or relay, there is no central directory server to tell a new node where to locate neighbours.

With a decentralized model, for a secure communication users will have to share the keys directly with each other making it vulnerable to man-in-the-middle attack.

They also give a comparison of decentralized peer-to-peer overlay networks: 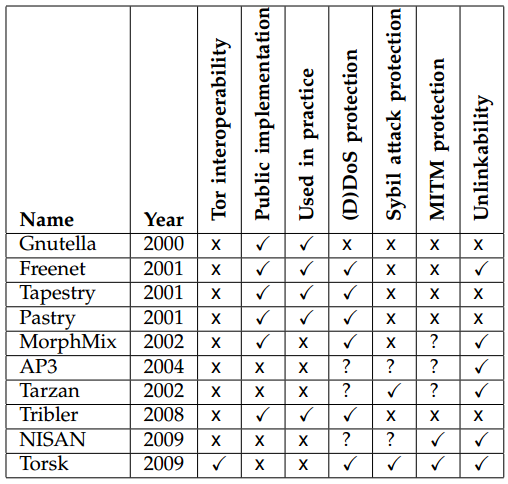 It is interesting to read their conclusion:

..we conclude that there is no fully decentralized system capable of offering Tor anonymity today. For the first time we document in detail, the amount of wasted effort and pain spent in decentralization. The current generation of technology lead by Tor still has room for improvement, while the next generation is only just appearing on the horizon. The major problems involving decentralization are excruciatingly difficult to overcome. None of the projects have succeeded in making the internet secure and private.

Now though: decentralised networks are here, built on blockchain. zeronet.io is one example and web3 will have a blockchain backbone. As a side note, stor.j provides a 100% trust-less, encrypted decentralised blockchain powered ‘super cloud’ storage solution that smashed Dropbox into 10000000 pieces of junk. 👌🏼

Not the answer you're looking for? Browse other questions tagged censorship or ask your own question.

4
Why can't I link to .onion domains from Wikipedia?
2
Complete Network Noob: please help me set-up Tor
5
Why is Tor not illegal anywhere?
2
Tor and Orbot not working in Ethiopia
0
How to get into Tor network if provider is using deep packet inspection?
1
IRAN blocked tor network, THE NEW CHINA?