How does TOR extend circuit to a third node?

I am reading the Tor: The Second-Generation Onion Router article and my question is that how TOR extends circuit to a third node?

On page 7 of the article,left column, it says:

If Alice talks to OR2 through OR1, then what commands should she use? As we know extend command was used to extend circuit from OR1 to OR2 and seems it can't be used twice.

Alice talk to OR2 through OR1( the entry node). You can see from the image below: 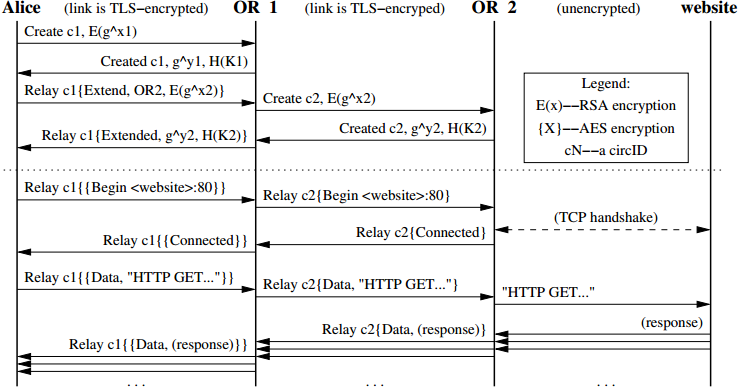 To extend to a node n, a relay extend cell should be initiated by Alice through the entry node (OR1) which is propagated up to the n-1 node, which sends a create cell to n, telling to extend the circuit. Once n sends the created cell to n-1, it propagates the relay extended cell back to Alice.

To construct a relay cell addressed to a given OR, Alice assigns the digest, and then iteratively encrypts the cell payload (that is, the relay header and payload) with the symmetric key of each hop up to that OR. Because the digest is encrypted to a different value at each step, only at the targeted OR will it have a meaningful value.

The Tor Path Specification and Section 2 of this thesis has some really useful information.

Not the answer you're looking for? Browse other questions tagged circuit onion-routing protocol or ask your own question.

27
How does a Tor client pick Tor nodes for circuit creation?
17
For how long does a circuit stay alive?
9
Does Tor take node age into consideration when building a circuit?
4
How many streams does Tor attach to the same circuit?
7
How to force Tor to use just one circuit?
1
“New Tor circuit for this site” does not work?
0
Why can't a modified guard node compromise the network?