Is there a security risk posed by The Auto-update feature of Tor Browser?

I run Tor Browser 4.0.8 on Windows. I've noticed since the upgrade from Tor Browser 3.x.x that Tor Browser now has an Auto-update function very similar to Firefox (see pictures). 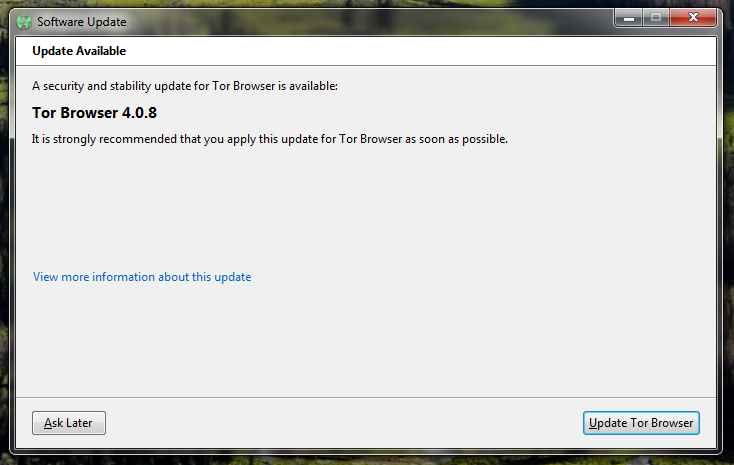 Does using this update window pose any security or performance threat when compared to the traditional method of going to Tor Project's website and downloading the installer file?

Using the auto-update feature is the recommended way to keep your TBB installation current. Use it.

As far as I am aware, the TBB auto-update functionality does so over SSL and has some form of signature checking in place to prevent against MiTM attacks injecting malicious code into an update (a good example of such an attack is bdfproxy).

To verify this, I would advise installing TBB in a VM, running Wireshark, and waiting for the auto-updater to kick off and monitoring its traffic to check if it IS doing so over HTTPS. I intend on doing this once I have a bit of free time, but if you get there first, go for it :)

TL;DR: Probably does not introduce risk, unless someone MiTM's you during the update and gets around SSL/Sig checking stuff that I believe is in place. However, best verify.

Not the answer you're looking for? Browse other questions tagged tor-browser-bundle firefox update or ask your own question.

2
Why not update Tor browser to the latest NSS?
4
How to keep (or import) the Tor Browser's history, when updating from an older version to TBB 5.0?
3
Is there any risk to use the Tor Browser along with other programs (not using Tor)
2
Why is TBB telling me "Your version of Firefox is out of date"?
1
How to update Tor Browser
1
How to disable Windows Tor Browser 9.0 update check?
0
Latest TOR Browser Bundle update fails to open privacy/security settings tab, strange behavior
3
.mp4 links fail to open, and other minor things in 10.0.10