How Guard Discovery attack works? What steps an attacker need to perform in order to discover the guard relay of the HS? How easy this attack can be realized in the real world? What are the countermeasures?

This attack is presented in great detail in Section VI and VII in the original article "Trawling for Tor Hidden Services: Detection, Measurement, Deanonymization". An important point to note is that to carry out this attack, control over at least two Tor non-Exit relays is a prerequisite.

To quote from the paper: 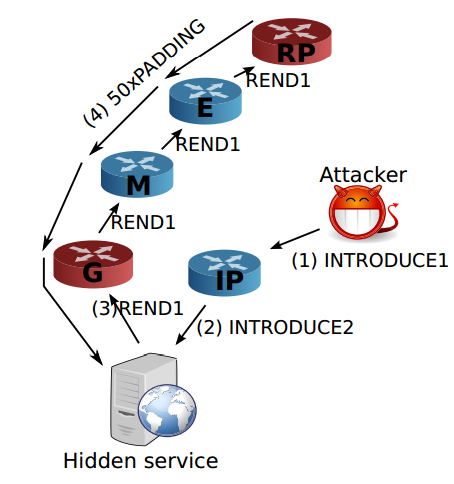 It is unlikely to eliminate the risk of risk of guard nodes being able to deanonymize a hidden service having chosen them, but suggested countermeasures include:

Not the answer you're looking for? Browse other questions tagged onion-services attacks guard or ask your own question.

9
Would distributed denial of service (DDoS) attacks on the directory authorities disrupt the Tor network?
1
Is Tor network making any noise to confuse global adversaries?
3
If my network link is subject to frequent, short, outages (a gentle form of DoS attack?), can this help promote other nodes to guard before mine?
1
I am using my Tor relay as my entry "guard" for the TBB. What are the risks/downside of doing this?
1
How can I randomize the entry guard?
4
Standard way to map an ICANN domain to an .onion domain?